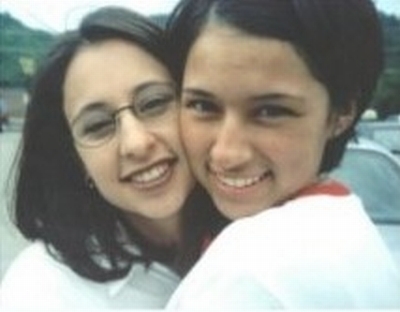 by Crystal Hernandez
Speech for my sister, The Graduate--May 22nd, 1998

"I couldn’t come up with a gift that would encompass the specialness of this occasion, something that I could buy, so I thought that doting on her for a few minutes would hopefully suffice.

Those of you who have a younger brother or sister know the importance of birth order in growing up. As a firstborn, anything I wanted to wear, to buy, to do—she did too. It frustrated me to no end. Some of you may remember those few years back when we looked like identical twins. I know a lot of you remember, because I was called 'Lora' for about three years!

I made sure though that she knew who was the oldest. In sixth grade I think it was, we started fighting a lot, so to end the fight I would just say, 'Look, you’re just an immature little third grader!' Throughout the year I continued to use that, and it’s become a longstanding joke now, because next year it was, 'You’re just an immature little fourth grader!' and so on.

All through those years, all I kept hearing from my parents and grandparents was how important it was for me to be patient and how because I was the oldest she looked up to me as a role model. That wasn’t very much consolation to me because she kept borrowing my clothes…but it was kinda nice to be looked up to.

When you’re the oldest, you’re also the first to graduate…and maybe go to college…and maybe that college is far away. In my case, it was Nashville, Tennessee, and to those of you going to Nashville or to Tennessee or anywhere close—welcome. Along with this I was really worried because who would take care of my sister? I’m very protective of her. And who would she look up to? It was always me! Well, I went away and something happened. She turned into quite a person all her own. The friendships she had became stronger, the talents and gifts God gave her became more pronounced, until suddenly, even from far away, I was seeing not just a little sister but a beautiful person with so much of her own to offer.

Living two thousand miles away for the past three years has taught me something. The word 'sister' implies a friendship that cannot be separated by miles or years. And you know what that means? Lora, that means we’re stuck with each other…as sisters…for the rest of our lives! And you know what I have to say about that? Thank God. Because after all these years of hearing how much my little sister looks up to me because I’m the oldest, I’d like to set the record straight.

It’s instinct for me to remind you, Lora, that you’re just an immature little graduate but I know better. These last few years I’ve watched Lora become this godly mix of creativity, integrity, and generosity, due in large part to the equally incredible circle of people she’s chosen for friends. I admire who Lora is and what she stands for, and no sister could be as proud as I am right now. I guess what I’m trying to say, Lora, is…that I’m the one who looks up to you, and I couldn’t pick a better person to want to be like.

Vaya con Dios, and I love you."