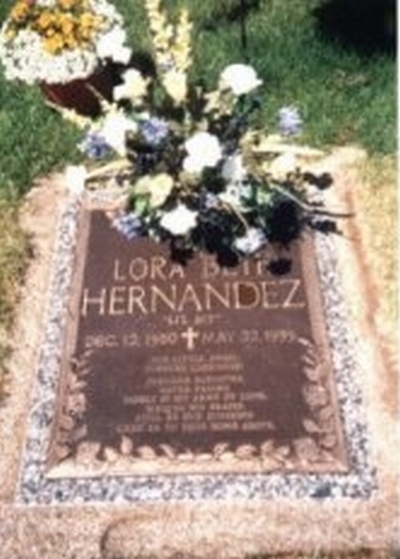 May 2000
On the anniversary of her death.

May 2001
On the anniversary of her death

May 2002
What would have been her college graduation weekend

Near Columbus, Ohio, shortly after midnight, in the first minutes of Saturday, May 22, 1999, the life of Lora Beth Hernandez was cut short. She and a few other college-aged friends had gone to the movies and were on their way to a restaurant. From the opposite direction, the driver of an on-coming van drifted into their lane. (We believe he fell asleep at the wheel, as there is no other plausible explanation--he narrowly missed the car ahead of the girls, never braked or slowed down, and never once attempted to correct his vehicle). The girls were doing nothing wrong--no drugs, alcohol, sleepiness, carelessness, or other factors which might have contributed to their deaths.

The car Lora was driving was hit head-on. Lisa Roberts, the front seat passenger who wore a seatbelt and had an airbag, died at the scene. Carrie Thornton, a back seat passenger who was unbuckled, survived with injuries. We are sure she was saved by Lora's quick reflex to cut the wheel (heading for the ditch)--all those years of softball and volleyball paid off "in the crunch." Lora, also buckled in and with an airbag, was alive at the scene but in a coma. Several hours later she died in surgery. To the day, it was the one year anniversary of Lora's high school graduation from Westside Christian Academy in Helena, Montana.

Her always ready smile, her compassion and unconditional love for others, and her childlike sense of humor will be missed by all. While she was certainly not perfect, she knew One Who is and Who lovingly cleansed her heart whenever she called on Him.

Besides her parents, Tony and Jan Hernandez, she has gone on ahead of her sister, Crystal, her brother, Brandon, and a multitude of relatives and friends with whom she shared a deep and abiding love.